To cover a house plant’s pot!

I have a tree in my house!   I’ve had this tree for over 20 years!  It is a ficus, which is tropical (at least compared to Minnesota!), so it can visit the great outdoors in the summer, but spends winters inside!  Over the years it has been re-potted into bigger and bigger pots and now weighs nearly 100 pounds.  When we moved last fall, we finally built a dolly just for my tree so it can roll around on the tile floor.  But the big, green, plastic pot is rather ugly.

My tree’s pot – functional, but ugly.

After years of being outside in the summer sun, the plastic is faded and scuffed.  It needed a dress!  So I put on my creative hat and went to work at my FeltLOOM.

After measurements of the pot, I felted a rectangle made of 50% alpaca / 50% wool – the same fiber as I use for felted insoles.  The rectangle measured about 75″ long and 30″ high.  It is much thicker on the top than on the bottom, for reasons you will soon understand. 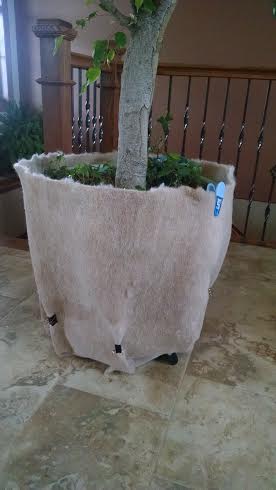 Using big paper clamps, I estimated the shaping that would be needed around the bottom of the pot.  I marked these with a grease pencil on the back side of the felt.

I went to my fabric stash to find some bright teal fabric, but I didn’t have any bright teal.  I found a darker teal and a bright red.  This is just lightweight cotton/poly fabric.  After some Facebook voting, the red won.  I sewed two strips together to get a piece long enough to go the length of the felt.  I pressed under the long edges of the fabric. 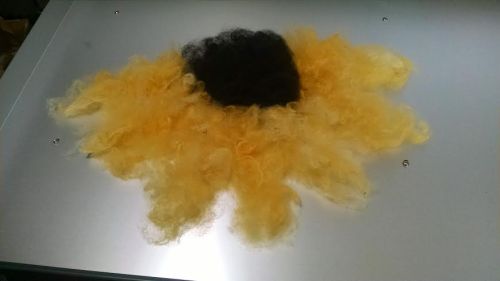 I found some black alpaca fiber from one of my alpacas and some dyed yellow alpaca fiber and loosely felted this partial sunflower.

I cut the sunflower so it would not cover where the darts would be that I marked for the shaping.

At the same time, I put the red fabric strip and two pieces of bulky alpaca yarn that matched the sunflower yellow on the felt piece and ran the entire thing through the FeltLOOM.

Everything is felted in place. 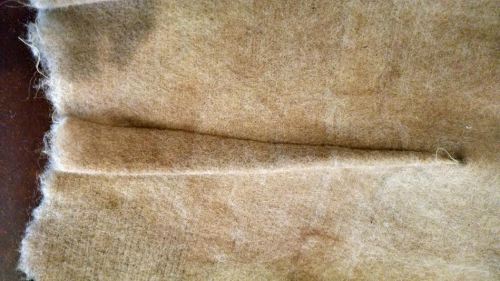 Close up of a dart

On my sewing machine, I made the darts that I marked out earlier.

Six darts around the bottom, give it the shape needed to fit around the plastic pot.  These were really thick near the point of the darts, but my old sewing machine did the job with some protesting.  I was sure glad I had made the felt thinner near the bottom. I didn’t cut open the darts as they add stability on the bottom.

Mismatch on the darts

The darts didn’t match up with felted sunflower exactly, so I hand needle-felted some additional fiber onto the bare spots to complete the sunflower.   At this point the darts would have been way too thick for the FeltLOOM to handle. 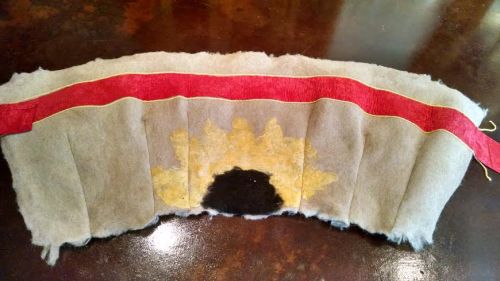 Bare spots are filled in.

I sewed under the ends of the fabric and yarn, then added a row of big grommets near the edges. 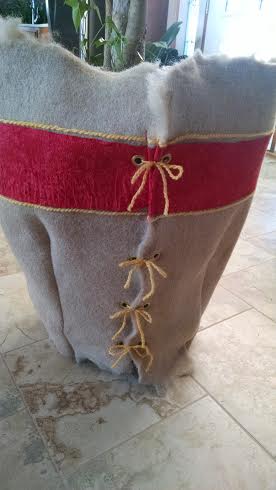 I used some of the yellow yarn to tie the edges together using the grommet holes.

And there it is.  My tree has a lovely new dress to wear during its winter time indoors.  And it is easy to take off when the tree goes out on the porch for the summer.

This was a fun project that added a nice pop of color in the kitchen/entry way.